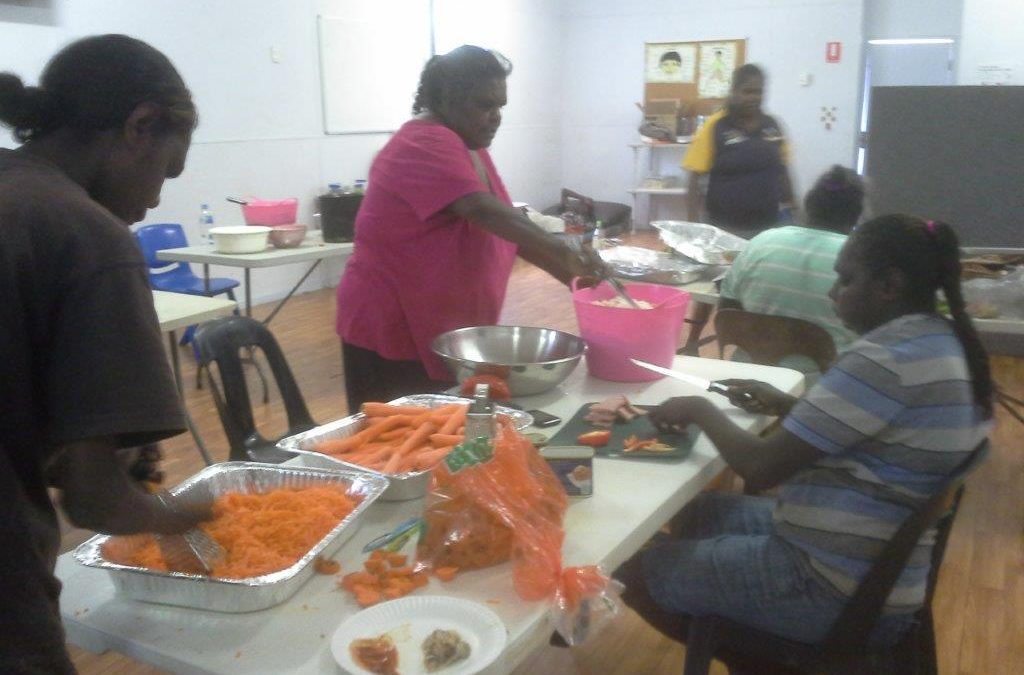 Many planning and liaison visits to various community members were carried out and a group of ladies were driven to the shops to buy food and other necessities for the Christmas party and a group of seven of the community ladies gathered in the language centre in the afternoon of the big day to prepare enormous quantities of healthy salads for dinner. The work was directed and supervised by Denise Bradshaw and she was supported in making all significant decisions in relation to the event. The men secured a beast from the pastoral station for butchering and cooked it as a hungi. These costs were born by the community and many community members were involved in the preparations. 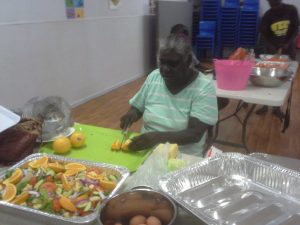 A list of children had been compiled by Gail and was added to by the ladies of the community and it was discovered that there were not enough gifts to give one to each child expected to attend the party. Consequently we undertook a shopping expedition to purchase another fifty gifts which all had to be wrapped and labelled before the party on Wednesday evening.
The party began at 5:30 with the distribution of gifts to the children from the back of the troopy (which was completely filled with parcels). The excitement of the children as they surveyed the colourful gifts through the locked windows of the vehicle was wonderful to watch. One child with shining eyes announced, “this year I’ll get TWO presents- one from Mum and dad and one tonight!” To our distress, despite having brought about one hundred presents, we were six short. We were able to produce another five by plundering more generous gifts
At a rough estimate about two hundred people attended the party and it was a really successful event. Denise Bradshaw was the driving force behind the event and demonstrated a very capable gift for organising and mobilising the other community members. As Duncan was unable to attend that evening there was only one white face at the event after Jo Mar’s departure early on and it was truly the Mowanjum people’s effort and enthusiasm that made it happen